Lucy Phillips and Jonny Ingall have been performing as a duo since 2017. They met as founder members of the Sheffield-based quartet Sarentino Strings, and their mutual love of chamber music developed into a romantic relationship. They are passionate about introducing their audiences to lesser-known works. Recent performances as a duo include at Classical Sheffield’s Classical Weekend 2019 and in Annabelle Lawson’s in:spire concert series. In January 2020 they performed the inaugural concert of the new Sounds of the City concert series in St Matthew’s Church, Carver Street. They have also established their own regular Sunday‑afternoon concert series at Fulwood Old Chapel, Sheffield.

Sadly, due to COVID-19, the remaining concerts they had planned for 2020 have had to be cancelled/postponed. However, some of these may be able to take place in 2021, so sign up to the mailing list to be the first to hear about them: eepurl.com/dxwOiz 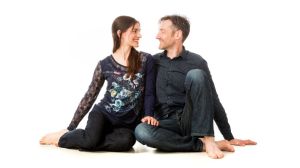 Jonny grew up in Rotherham and studied cello with Jennifer Round. He was awarded the ABRSM’s Marguerite Swan Memorial Prize for the highest mark for Grade 8 Cello in 1990. Following a twenty-year break, he came back to playing the cello in 2013. Soon afterwards he joined Hallam Sinfonia, and in 2015 he was appointed principal cellist of Sheffield Symphony Orchestra. He performed Fauré’s Élégie in June 2018 at Wentworth Woodhouse with Rotherham Symphony Orchestra, with whom he was also principal cellist. When he is not busy playing his cello, Jonny works as a freelance braille transcriber, proofreader and copy-editor.

Please check back for further updatesJuly 7, 2020